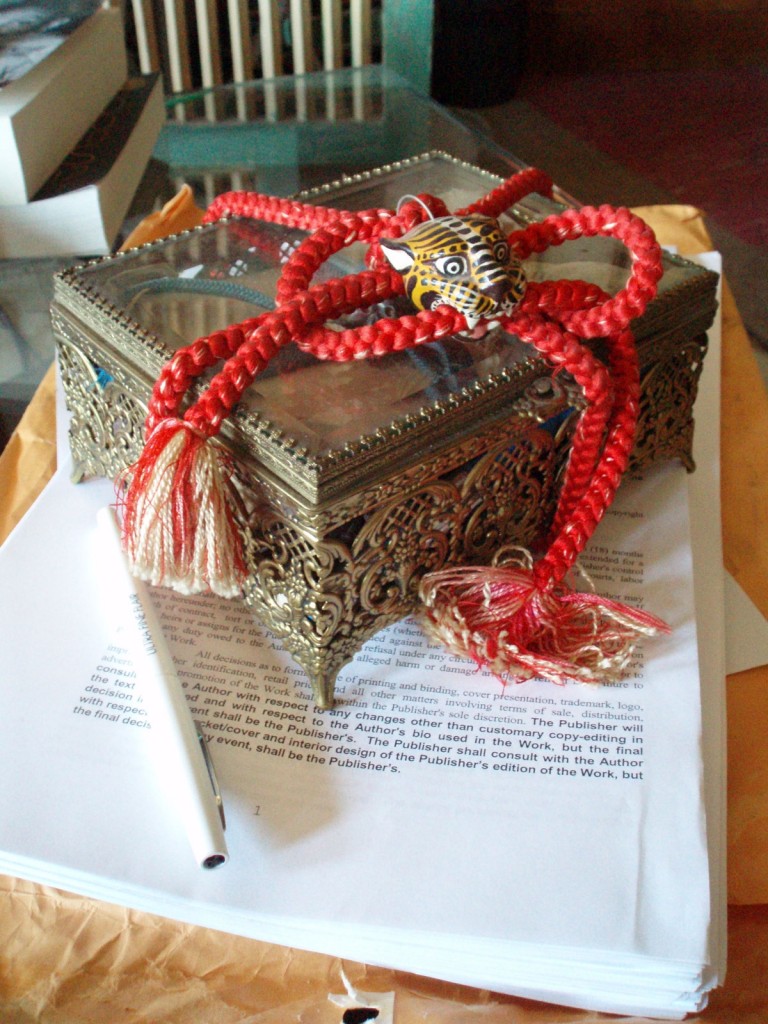 It’s no secret to anyone who knows me that I‘ve always been deep into -- shall we say -- the esoteric?  My high school nickname  was “Phantom”, because I read everything I could find on witchcraft, vampires, werewolves, UFOs.  The lot.  Montague Summers was my mentor then, and Hans Holzer.  I can attribute much of it to my maternal grandmother, a self-taught mystic, comic book and monster movie fan, but I think I would have found my way there even without her.

When I started BITE MARKS: A Vampire Testament in the eighties (then called BITE, until I discovered the late Richard Laymon’s fine and quirky novel of that title) I’d already found an old gilt jewelry box in a flea market.  I decided to turn it into a fetish box, a talisman to get me to focus on finishing the book.  Looking back, I think I was probably being driven by a mad love of Joseph Cornell’s box art I’d seen at MoMA, and fetish objects in the African collection at the Met.

I filled my box with the original set of index cards printed with the story sequence, a Tiffany pouch with six Gettones (coins used to make pay phone calls in Italy then, replaced by phonecards) for casting the I Ching, dried flowers, and my first fountain pen -- an old Wearever I’d found in my grandmother’s attic as a kid.

I’d never seen one and when I brought it down, she explained how it worked -- the lever that filled the bladder, the soft nib that gently splayed to change the width of the line as you pressed down...I filled it with ink from my mother’s art supplies, begged to keep it and spent the day writing and drawing with my prize.

I resolved not to open my fetish box until I sold the book, and decided that I'd use my grandmother’s old fountain pen to sign the contract when I did.  When the time came to sign the two contracts for the first of the Vampire Testaments, I brought the box to my agents’ office.  I told them the story, opened it for the first time since I’d tied it up, and signed both contracts.  I’m sure my grandmother was beaming with pride that day from the other side. 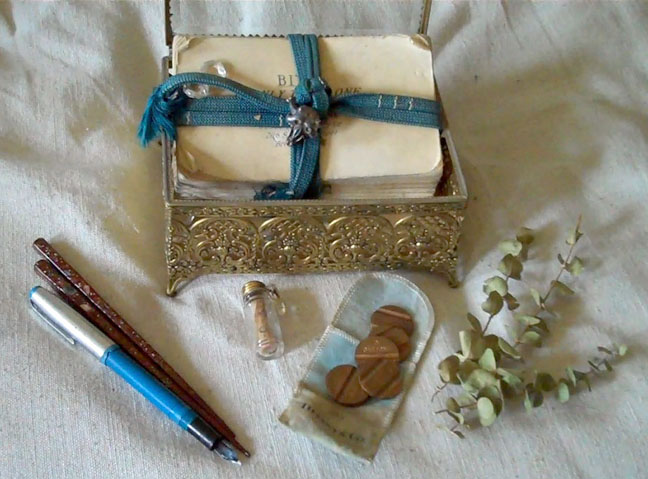 I am not saying that magic got the books published.  If it had, I would have wanted all this to happen much sooner, only a few years after the box was sealed, not twenty.  What the box's magic did, if anything, was keep my vision of the story clear in my head, turn the characters into people so real I can get inside their heads anytime, walk them anywhere, in any age, and know exactly what they would say or do.  To me, that is magic.

I made a world in my own image.

I sure as Hell am not God, and wouldn’t want to be -- as Jim Carrey learned in Bruce Almighty, Steve Carell in the sequel  -- but writing can be a godlike feeling, and lets me see how a God who could create us would love us, whether we were good or evil, and want us to be the best we can be.  Not just for what we are, but for what our nature says about our creator’s own identity.

As a child I spent hours in my room making up stories after reading Ray Bradbury, C.S. Lewis, Roald Dahl, fairy tales, horror stories or mythology.  All the kids were into Batman on TV back then, including me.  I’d act out my tales of their adventures with improvised action figures, back when G.I. Joe the only one we had.  I made mine out of pipe cleaners, multicolored ones, combined with Play-Doh or masking tape to form heads and faces, using crepe paper for capes.  I built a Batcave on my desk on a big rectangle of slate flooring I’d found somewhere.

My miniature Batman and Robin battled the Penguin and the Riddler, complete with explosions courtesy of stick-on caps sparked by a pin pushed through a pencil eraser.  I shudder to think of what my parents never knew about how I achieved my special effects -- like the time I ignited a liquid pool of rapidly evaporating butane fuel only to discover how fast and far it combusted when lit.  Fortunately it also burned away harmlessly before it could burn down the house.  It was my last experiment with flammables.

Don’t try this at home, kids!

I lost myself in those little worlds in little stories then, developed the muscles I’m exercising more fully now, a sort of sorcerer’s apprenticeship.  Now my stories are longer, more complex, deeper and more real to me than anything I did then.  I am far from being Master of my Dark Art, but do feel more capable and enjoy it more than ever as a hard-won pleasure.

Looking back, I do see a kind of magic in it all, represented by my gold gilt fetish book box.  The magic of a grandmother who loved the books and movies she enjoyed so much that she shared them with a grandson who used their lessons to survive a confusing life.

The magic of a mother who gave her son the freedom to explore those new worlds, and believed in him enough to supply the raw materials for him to shape his wild visions.  The magic of a father who saw a better, bigger life for his family than he’d had, who gave his children the opportunity to really see the world, in a way few kids could then, and decide what it was for themselves.

I try to be open-minded, and don’t disbelieve in most esoteric issues.  I even believe in a few things that deep down inside I know are probably crap.  Still, I also know that there must be something larger than us, something we aren’t developed enough to even understand or define.  My box was an appeal to that higher power, call it what you will.  It kept me working during any time I could make or steal to write.  The work grew as I did, and as it reached maturity, enough to enter the world on its own, I discovered that I’d grown up as well.

If I know anything else, it’s that it couldn’t have happened any faster.  From my current vantage point, I can understand why, no matter how frustrated I’ve been in the past.  All magic comes in its own time.  Which reminds me, I have a third book to finish...gotta run.

I have to go look for a new box.

Making the case: Why matter management for legal is the solution you, and your clients, need