I spent ten years living in Los Angeles, and somehow never managed to get to Las Vegas or Hawaii, the two biggest vacation destinations for people living in and passing through the City of the Angels.  Not once.

It wasn’t monetary.  There were years I did quite well in Hollywood and even drove a sporty dark blue-green Miata, the last resort of a disillusioned East Coast writer trying to convince himself he was happy there.  I could certainly afford to go to Vegas, I just didn’t have a circle of friends who were likely to pick up and go all Rat Pack for a weekend.  So when I was asked to go there for two days to shoot Pledge breaks for a Great Performances concert event for WNET/13, I said yes, and not just for the paycheck.

I’ve always been curious about Vegas.  Who hasn't?  I’ve seen the movies and TV shows, seen the way it gets tarted up for the cameras.  I’d heard how it‘s slipped from glittering glamour to family friendly.  I’d heard that there is the Strip, and then there's the rest of Vegas, which supports it, and heard that wasn't true, that Vegas was great place to raise a kid.  Who wouldn’t go? 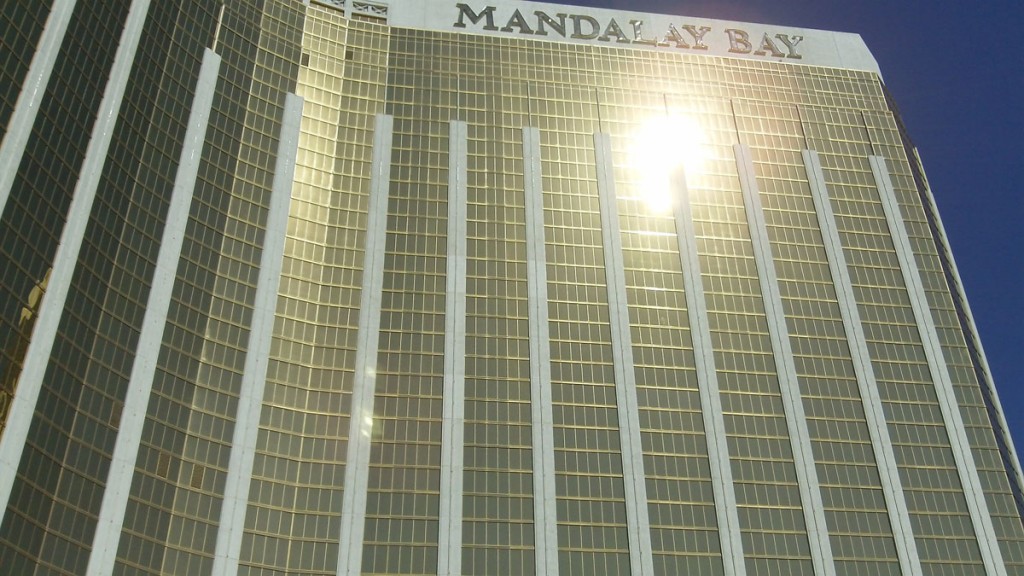 f course, the blessing and the curse of production is that you see only as much of any location as you are working on.  Fortunately the concert was being taped at the Mandalay Bay, one of the newer bigger classier joints.  It has the sleek comfort of a Ritz-Carlton hotel on steroids, the scale worthy of a Caesar, not to be confused with the one of the Palace down the street.

We arrived Thursday for the first day of shooting, doing an interview with David Foster, the composer/producer and center of the show.  He’s been in the business 40 years, has one of those craggy ageless faces that you can't help but feel reached a look it liked and just decided to stay there for the next sixty or seventy years.  The time we were to have with him kept compressing as rehearsals ran on, until we had a half hour window before he had to gulp down food in fifteen minutes and get back to the set. 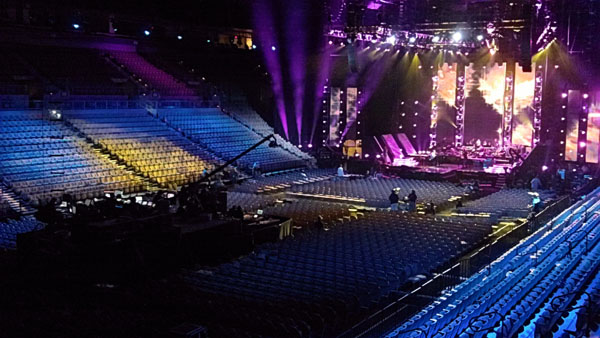 He flew into the room from make-up, dropped into the chair and looked like he’d been sunning at poolside for the last six hours, rather than negotiating the performances and staging of countless star talents of at least two generations all day.  Christina and I had prepped earlier, wrote and arranged questions to get what we wanted as quickly as possible, and he answered them like they were having an intimate chat at the after party.  We got twenty minutes of gold, more than enough to cut together what we needed for the breaks, and he flew back to whatever food he could get before hitting the keys again.

He has this simple but amazing ability to be in a room fully, to give his full attention to whoever is in front of him at the time, which I have problems with, even on set.  Watching people at a certain high rung of success is fascinating when you see something that helps explain why they are where they are; his musical abilities aside, Foster has an easy seductive charm that explains the three ex-wives, and how he gets what he wants in the studio or on set, no matter how much he gives.  The next night I saw him work the same magic on the stadium audience as they patiently sat through retakes, technical delays and all the issues that arise doing a live show that’s also for TV. 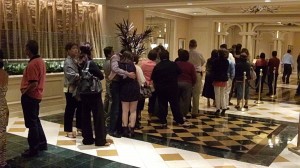 The taping started around 8:15, and ran until 2am, long after I’d wrapped my humble three-man crew and returned to the hotel.  I was amazed when I heard the stadium audience had stayed for all of it, but then I remembered how Foster had been handling the night, the easy banter, jokes about cutting some catty comments out of the show, pulling people on stage from the crowd when there was a minute delay to let them sing for 30 seconds...it was like being at a big insider show biz party, where all the famous guests got up to clown around with the host and belt out your favorites of their old hits between jibes.

Ah, I thought...this is what the Rat Pack brought to Vegas.  This is what it was like to sit at a table in the sixties and hear Sammy, Frank and Dean kid each other between drinks and numbers, a part of the scene.  Like you belonged, no matter what town you came from or how crappy your life was. 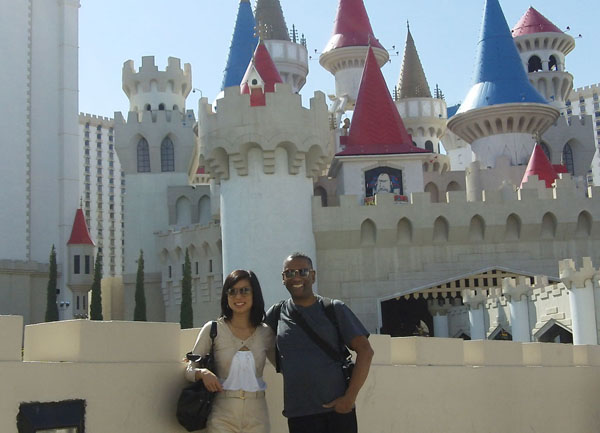 Most of the trip was spent racing between our rooms and the stadium, shooting, preparing to shoot, or recovering from a shoot.  Before we started on Friday afternoon, Christina and I had time to run out to the Excalibur for the buffet lunch, which she said brought back memories of the Maryland College lunchroom.  We paid a fast visit to the Mandalay Bay Beach -- You have to see a beach in a desert.  The sand was white and plentiful, very tropical, and the water azure blue.  There was a wave generator that sent the water rushing at the fake shore every few seconds.  It was like something out of Westworld, total environment makeover. 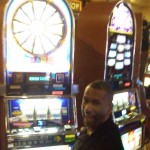 We got to have a drink at the casino after we wrapped our shoot.   I bet one dollar in a slot machine and lost it immediately.  Looking around at $100 minimum Blackjack tables, I wasn’t tempted to go any further in my gambling career.  Christina put in one dollar, won five, and had the sense to stop, so she came back from Vegas able to honestly say she’d won five times what she gambled. 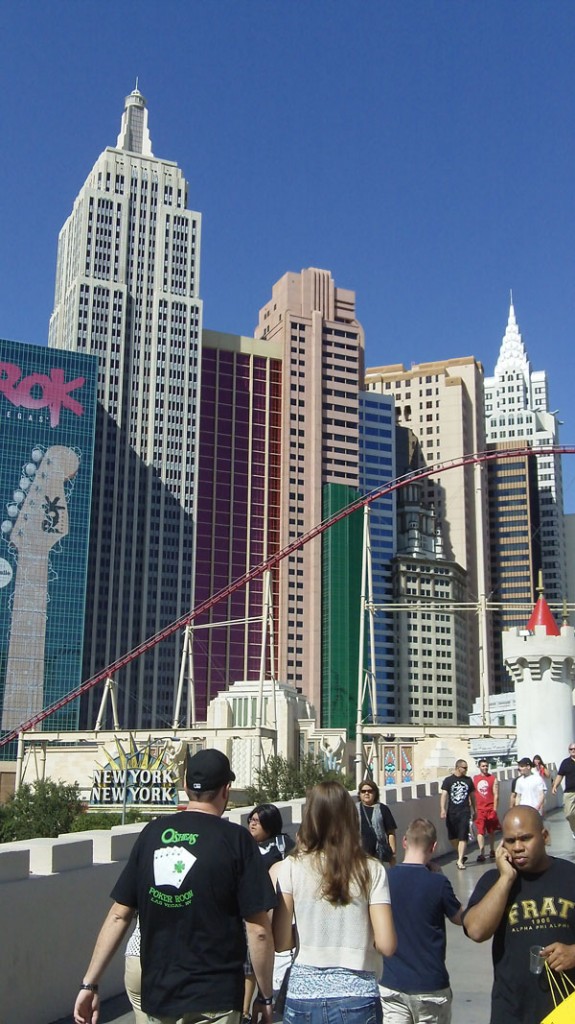 all its glory, but I can say that New York New York looks like Bizarro New York, the proportions all wrong so they can shove a hotel into it.  I forgot that the Liberace Museum is closing or I would have made a beeline for that, and bought as many souvenirs as I could have as Christmas gifts.  I saw a lot of people, many more on Friday than on Thursday, all walking around with the same kind of goofy grin you see on kids’ faces their first time at FAO Schwartz.

But for all the good-natured glitz and tacky faux glamour, there is still the dark underbelly...

The elevator doors opened as we were headed back to our rooms the second day, and there was a group of twenty something young people outside, male and female, dressed for a night on the town, one at each door of the six elevators.  The blonde girl outside our door looked at us in mock disappointment as we saw that we weren’t the only open doors.

There are slot machines at the airport, gambling machines mounted on the surface of the bars, so you can keep playing as the drinks drop your face down lower and lower for a better view of the screen, tables of all kinds to satisfy any urge to indulge, and it’s not enough.  They even lay odds on the elevators.

Thank God that what happens in Vegas stays in Vegas.  That's all that keeps us from walling it up like Montresor did in Poe’s A Cask of Amontillado.  It has to stay there, whatever it is.  If it ever gets out, we are all doomed. 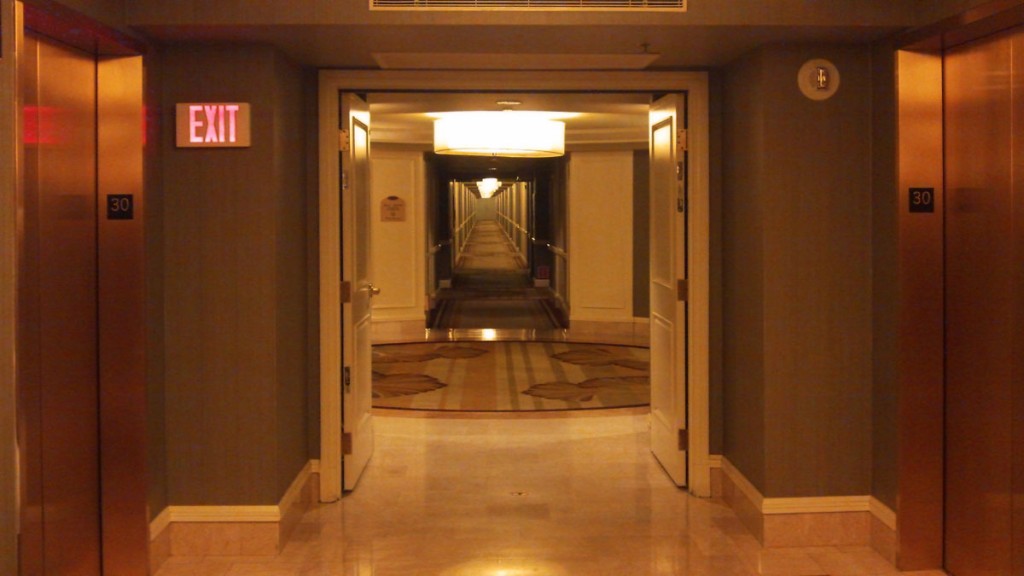