Me and my little friend Tony outside the "Overlook"...

I recently visited a friend in Boulder, Colorado, before she moved back to Singapore.  While I was there I rented a car from a very fun local non-profit agency called eGo, and we made plans to drive an hour north to Estes Park.

When I told my hotel clerk where we were going, he said, “Oh, that’s where The Shining hotel is...”  I think I actually hopped a bit in glee when he told me that.

I’d never heard of the Stanley Hotel, much less that it was outside Boulder.  I must have heard the story of how Stephen King stayed there after “Carrie” was published, but didn’t remember the name of the hotel.  The parking lot attendant filled us in -- King was working on a new novel about a family trapped in an amusement park when he went to stay at the hotel, not sure how he could trap them there.  He was caught up in the tales of ghosts, reworked his story and a classic was born.

The hotel is impressive, spread over a generous portion of land.  It overlooks the town, and standing on the front porch you can see that King took liberties in setting it farther from civilization.  They’ve taken full advantage of its history, both before and after Stephen King.  There are ghost tours, copies of “The Shining’ and both movies in the gift shop, t-shirts and caps emblazoned with ghosts.  Yeah.  I bought one, and a little foam rubber glow in the dark ghost for my bookcase.

A shop clerk told us that there’s a guy who looks like Jack Nicholson who likes to hang out at the hotel waiting for people to ask him if he is...about the only thing they don’t have is dress-up mystery weekends with him chasing guests dressed as characters from the book through the hotel with an ax or roque mallet.

There is a big bar that doesn’t look quite as sinister as the one Lloyd served Jack at in Kubrick’s version, and a waterfall in back I don’t remember from the book either, but guests and tourists racing around the lobby and grounds all seem caught up in the magic of the place, no matter how manufactured.

Specificity of place is a boon to writers.   Starting your story in a real setting, no matter how much you may change it physically or geographically, or whether you rename it, gives your tale some of the reality of the original location.  You can picture hallways, floors, the relationship between rooms.   As your characters move through the world you make for them, it remains consistent, stable, more realistic.

A setting can also grow in significance, into a character as important as the people whose story you follow.   How many times have you heard people talk about a city as a character in a story, or a house?   I like to take pictures of places that suit my novels, buildings, neighborhoods, and put them up on the wall in front of where I am working along with photographs of faces that remind me of the characters. 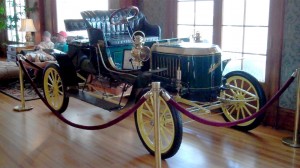 World building is key in fiction, especially fantasy of any kind.  Remember as you work on your worlds that a day spent roaming plausible locations with a digital camera, and quick stop at a photo printer at your local pharmacy, and you have a wealth of research that costs you the price of bus fare and prints.  Need to see streets in other cities, or around the world, but can’t afford to get there?   Find photos.  Google street view works wonders, and found me the perfect place to set the opening chapter of "PAST LIFE: A Vampire Testament", at an isolated McDonald’s restaurant in the Cajon Pass outside of San Bernadino.

So build your worlds real enough to let your imagination run wild in them, but also know -- you don’t have to build them from scratch.   Reading isn’t the only form of research, and when it comes to creating a believable setting, a visit and a photo can be worth a thousand words or more.